As part of the thought, the students of classes 1 to 6 need to convert into English medium from the subsequent academic year 2020-21. The AP Government has decided to introduce this medium announcing they offend the 1968’s National Policy on Education Act. On 15th April, the High Court of AP ruled out both the GOs saying that the medium of instruction must be the preference of the parents and kids. 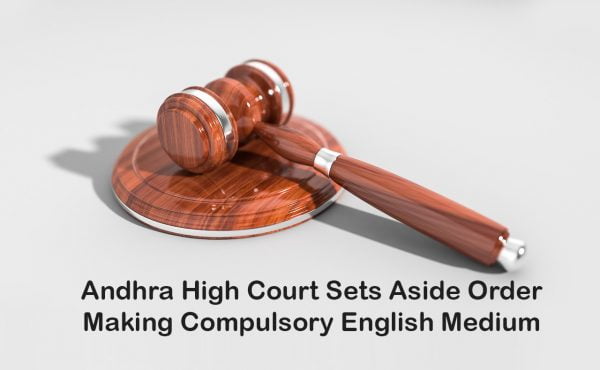 Different Public Interest Litigations [PILs] have opposed the GOs in the High Court. On the same day, two BJP leaders Guntupally Srinivas and Sudheesh Rambotla arrived at the court and gave enough reasons to cancel the orders. Even, the leaders opined that it should be the choice of the students whether to join English or Telugu medium. On the other hand, the State Government mentioned that by making English as a mandatory medium in schools, it will surely enlighten the students’ future.

The Government supported its argument saying that each kid will become successful in international competition. The High Court considered both the versions and finally decided to set aside the Government orders. M. Venkaiah Naidu, the Vice-President also objected to the thought and supported the idea of teaching in mother tongue right from the primary level. The opposition leaders, N.Chandrababu Naidu, and the actor-cum-politician disagreed with the Government’s initiative.

Affiliate Disclosure: www.kvpy.org.in is a participant in the Amazon Services LLC Associates Program, an affiliate advertising program designed to provide a means for sites to earn advertising fees by advertising and linking to Amazon.in.

KVPY.ORG.IN is not official website of Kishore Vaigyanik Protsahan Yojana or any other Government website. All information provided here is for education purpose only. We endeavour to keep the information up to date and correct. We do not claim any figures or facts given here.